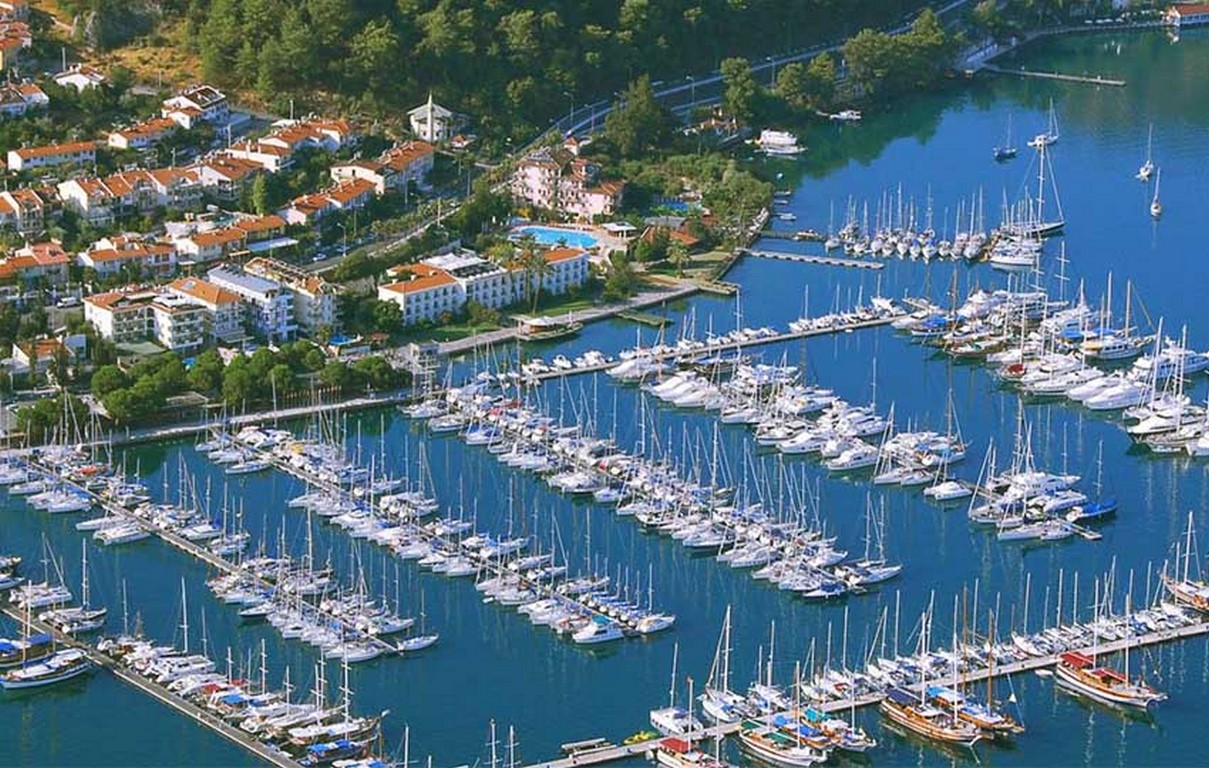 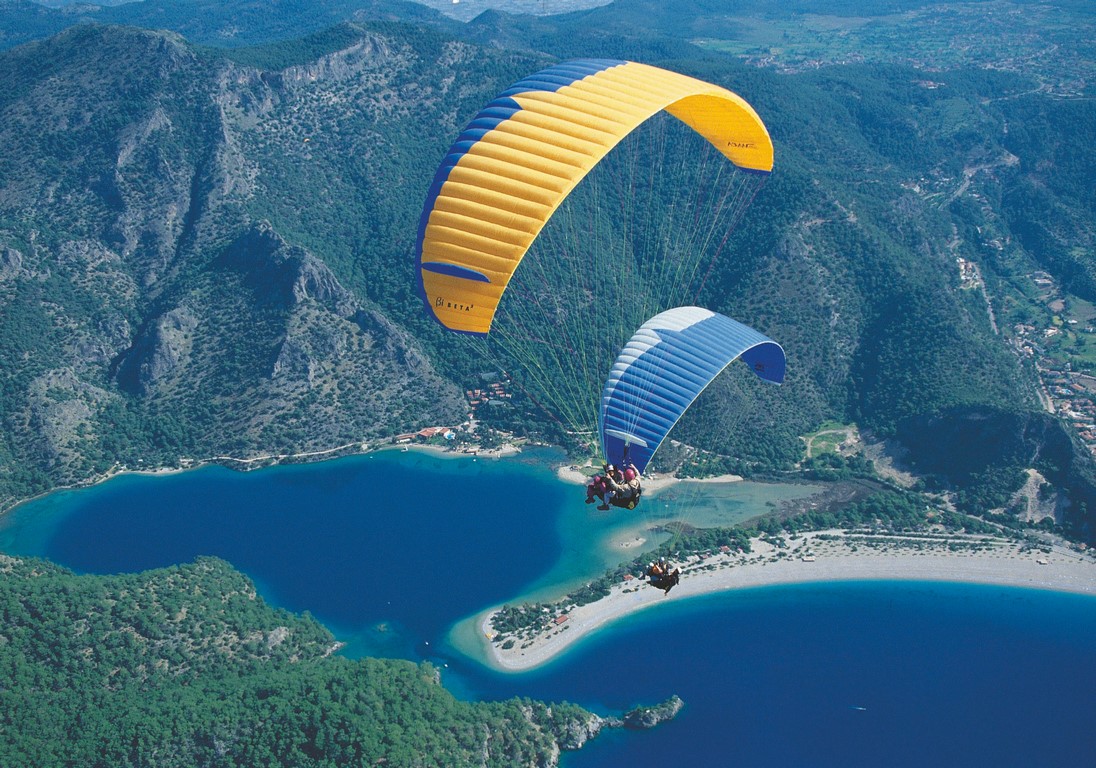 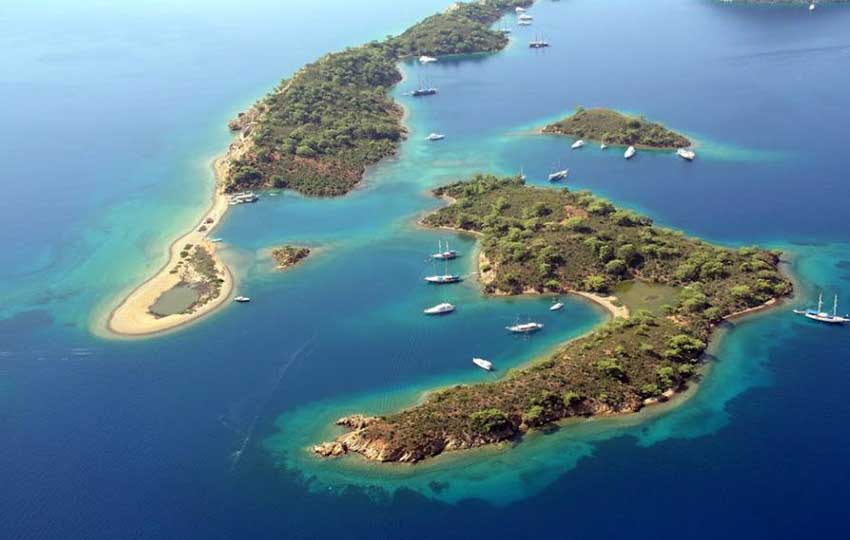 Fethiye is located on the Lycian and Carian border and was called Telmessos in ancient times. The city was very prominent and a centre of prophecy, pledged to Apollon. That the city life was rich and highly cultured during the Hellenistic and Roman periods is evident from the existing monuments. Today the majority of ancient ruins in Telmessos are rock-tombs, Lycian-type sarcophagi, the fortress and the Roman Theatre.
The peninsula lying between Fethiye and Antalya was known as Lycia in the ancient times. Lycians were natives of Anatolia and sea-faring people as mentioned in Homer’s Iliad and Kadesh War Peace Agreement document.

The tomb of Amyntas, which could be considered as the insignia of Fethiye, strikes the eye with its grandeur on the slope as you enter the bay. This tomb, whose façade was built as an Ionic temple based on the plan of in antis, belonged to Amyntas is believed to be a king or a governor of Telmessos during the Hellenistic period.
Within the city there are quite a number of Lycian-type sarcophagi. On these there are epitaphs in the Lycian scripture. Especially the sarcophagus near the government house is worthy of notice, with its relieves depicting warriors.


The fortress stands where the city was first founded and the existing walls are from the 11th Century. At same places, portions of walls from the Roman period can be seen. The fortress was repaired by the Rhodesian Knights during the 15th Century and was used as a naval base.
Telmessos Ancient Theatre stands opposite to the commercial quay at Fethiye town centre. Typical Roman type theatre was built in 2nd. Century on the remains of a Greek style previous one. The site was escavated by the Fethiye Archaeology Museum in 1993 and a restoration project was made to renovate the theatre’s cavea and stage.
Fethiye Archaeology Museum exhibits numerous Archaeological findings from the Lycian, Hellenistic, Roman and Ottoman periods as well as ethnological works of art typical of the region.

There is a new project to be realised in 2001—2002 for a new “open-air Museum complex with the ancient theatre”. Fethiye Municipality and the Directory of Museum are leading this project to reform the centre of town with the idea of protecting natural and cultural environments of Fethiye.
The Teke Peninsula of our times, lying between Fethiye and Antalya was known as LYCIA in the ancient times. In fact the Lycians participated in the Kadesh War together with Hittites, Which indicates that they were one of the oldest tribes of Anatolia. All through the history, Lycia was invaded by the Persians, Alexander The Great, Romans and Byzantines but was never evacuated. Fethiye is an appropriate centre for excursions into Lycia. Either on your own or by organised daily tours, you can pay visits to major Lycian cities in the region.

Fethiye has always been a major area of settlement throughout the history. This is due to the fact that the region is opulent in all aspects of subsistance. It bears the stamp of all the people living here in various periods, The region was known as ''Telmessos" during the Lycian times until the Roman Empire, when it was referred to as "Makri" (Megri), meaning far-off !and. In 1282 Mentese Beg, the founder of the Mentese Principality, fought with the Byzarithians and onquered Makri, PUR-suant to this dote, although in the official documents name Makri (Megri) was still in use, the popular name among the residents was "Iskete" or "Beskaza". The name Iskele was derived from the use of this town by the Ottoman Empire for sailing out to Rhodes and the out side world.

Similarly, the name Beskaza was in frequent use during the Ottoman times. As the central government had a hard time to dea with local matters, five regional ad ministrations were established. Under the auspices of the central administration, the five kadhis (local gover- nors) of Uzumlu, Yaka-Doger, Yakabag-Esen; Oren and Kaya were appointed. The name Beskaza was very popular and there are several folk dances and song bearing this name.

In the year 1914, a new proposal appears at that the Megri Municipal Council suggesting to change the name of "Megri" in order to commemorate Fethi Bey, the first Turkish pilot who was killed in a crash near Taberiye. This proposal was approved by the Council, presided by the Mayor of the time, Musaoğlu Mehmet cen, and the name "Fethiye" was used in all documentation However, due to the First World War and the subsequent Independence War, the Council of Ministers approval could only be obtained in 1934.